Scottsdale – Cure For The Winter Blues

Not Just An Island, It’s Another World 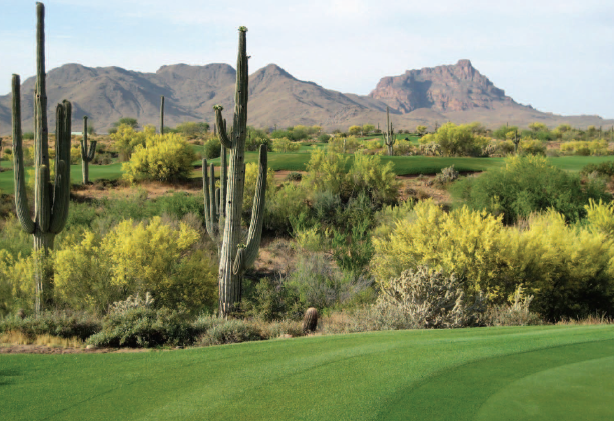 With 314 days of sun a year, and over 60 golf courses, it is no wonder that Scottsdale, Arizona has become such a mecca for golf enthusiasts and sun worshippers. Since my first trip there some 40 years ago, Scottsdale has grown by leaps and bounds to become one of the West’s most highly sophisticated business and vacation playgrounds. Today’s Scottsdale, which stretches some 33 miles from north to south, has it all…terrific golf courses, wonderful accommodations, restaurants to please any palate, shopping galore, a vibrant art district, and the Scottsdale Trolley, a Free shuttle which operates seven days a week providing access to parks, recreation, and shopping for vacationers and locals alike. Along with its nearby neighbors, Carefree, Fountain Hills, Cave Creek and Paradise Valley, Scottsdale is no long just a suburb of Phoenix. It is a much sought out destination by those seeking a restful yet activity oriented locale for a vacation or business conference.

As a golfer and golf writer, when it comes to vacations, my interests lean toward hitting a little white dimpled ball. I love the challenge of trying to hit the middle of a lush green fairway, drive over babbling brooks or areas of natural grass. I love to chip to undulating greens while trying to avoid the sometimes fluffy, sometimes gritty sand bunkers that are strategically placed in fairways and around the greens. I also love to putt on a wide variety of greens with their sometimes subtle, sometimes draconian breaks. The courses in and around Scottsdale offer all these challenges.

When in Scottsdale recently, I had the opportunity to try my skills against three beautifully manicured, strategically designed, and immensely enjoyable courses, Legend Trail Golf Club in Scottsdale, the Saguaro Course at We-Ko-Pa in Fort McDowell and Boulders South in Carefree. These three extremely scenic, challenging but fair golf courses are all within minutes of the newly remodeled Xona Resort Suites, an all suite resort where we stayed in North Scottsdale.

The Xona, which offers very comfortable one, two and three bedroom suites, is a great retreat for a couple, a family, a group of golfers or a company business conference. All were in attendance during our stay. As a member of the Annual Scottsdale Media Classic, I enjoyed most of our meals in either The Pavilion, the Xona resort's large banquet room or around one of the four swimming pools on the property. We did eat one night in the resort's Asada restaurant, a Sonoran Grill serving fresh fish, seafood, steaks, chops and poultry grilled or smoked and finished on the grill. We not only enjoyed the southwestern style cooking but also the casual atmosphere and the Arizona earth tone decor of Asada. It was warm and inviting place after a tough day of golf.

The first day of the Media Classic, I played golf at the Legend Trail Golf Club with three of the more than 90 golf writers from the US, Canada, the UK and the Czech Republic who were present for the four day event. We played from the Silver tees at 6400 yards, second longest of the five tees. Since I am a military type player...left, right, left, right, left...I got to see quite a bit of the course. Course architect Rees Jones designed a course that, depending on the tees that are used, is challenging and playable for both scratch players and rank amateurs.

The format for the first day of the three-day Media Classic was a Shamble. We took the best drive on each hole then played our own ball and scored the two best net scores of our foursome. With our handicaps, we came home with a net 9 under par, good enough for a tie for first in our bracket. Although score was important, the fun we had meandering through the scenic natural environment and admiring the Sonoran Desert landscape was the thing that had us really excited and pleased about our round. The wide fairways of summer bermuda grass were plush with over seeded rye grass when we played. Surprisingly, our foursome's favorite hole was the only hole on the course with water. We avoided the water which bordered the left side of the fairway for a good 200 yards, stayed out of the strategically placed fairway and greenside bunkers, carved our shots from right to left on the doglegged fairway and walked away with two pars on the 475 yard par 5, the course's number three rated handicap hole. It was a good hole and a good day.

Following golf we headed to the driving range to watch a demonstration by PING professional PGA Pro Bubba Watson, the tour's long-drive leader the past three years. It was easy to see why Bubba has led the tour in long drives. With a tempo and flexibility that were just like amateurs read about in Golf Digest, Bubba's drives raced into the atmosphere like bullets shot from a rifle. The ooohs and aaahs from the assembled crowd were constant as Bubba's 300 to 400 yard drives rocketed off his pink-shafted PING driver high into the light blue cloudless sky. Not only is Bubba a great golfer, he truly appears to be a squared away, down to earth person with a good understanding of his abilities and how fortunate he is to make a living playing and enjoying golf. After watching and hearing him, it seemed to be the consensus of those in attendance that he will becomes a top flight player on the tour. We all hope that is the case as he is fine golfer, an excellent representative for PING and seems to be a true Southern gentleman.

The second day of the three-day Media Classic I teamed with a journalist from Toronto. We played a two-man scramble and scramble we did. We hooked and sliced our way around Fort McDowell's We-Ko-Pa's par 71 Saguaro course. Course architects Bill Coore and Ben Crenshaw would have been chagrined to watch us as we hit balls into the cactus decorated desert, traipsed through dry river washes, and three putted a few of the beautiful undulating two-tiered greens. Although our golf left a great deal to be desired, the breathtaking views from almost every hole of the mountain ranges and the vast Sonoran Desert valley made up for our lack of skill.

The Saguaro course, which opened in January 2008, joined We-Ko-Pa’s Cholla course which opened in December 2001. Both courses yield dramatic and "natural" views of the surrounding mountain ranges. They are both definitely challenging whether played from the tips that extend out to 7,225 yards on the Cholla course and 6,996 yards on the Saguaro, or the forward tees at 5,289 and 5,061 yards respectively. Both courses have won numerous awards since opening including recognition in 2008 as Golf Digest's #1 and #2 ranked Best Public Access Courses in Arizona. When you play either or both, you will notice one of the somewhat unique features is that there are no residences on the course...and we are told...never will be. Pure, wonderful, scenic golf. My favorite Saguaro hole was the 4th, a long, long, long 607-yard Par 5. I enjoyed it not only because it was long, but because it had elevation changes, lush rolling fairways and lots of risk and reward options. My partner and I scrambled well, managed a "Par 6" and were proud of it.

The third day of golf was played at Boulders South, one of two courses at The Boulders Resort and Golden Door Spa in Carefree. Having played there once before, I was looking forward to returning to what I remembered was a stunning desert course. I wasn't disappointed. The golf course was in exquisite shape and the sight of the 12 million year old boulder formations that dot the course was once again amazing. Tall and rounded from millions of years of weathering, these multi-shaped giants stood guard as we attacked the course. We played as individuals and played we did. From tee to green I dodged from left to right, from the edge of the desert, to and from bunkers of soft beach like sand, from behind small and large Saguaro cactus. I played as if I were dodging fighters who were intent on strafing me right out of existence. It wasn't the course, it was my golf. I did manage to right the ship so to speak and made four pars and a birdie on the last six holes.

Besides being a gorgeous course, kept in immaculate shape, The Boulders South and its companion course, Boulders North, offer interesting holes of varying length, elevation, and degrees of difficult. Boulders South also offers one of the more unusual back to back holes combinations I have ever played on a championship course...two par 3's in a row. The 15th is 104 to 151 yards depending on which tee is used. The 16th is 141 to 227 yards. I will never forget the 16th because I came within inches of a hole-in-one that would have won me a seven night cruise on Royal Caribbean. As the last one in our foursome to tee off, I hit a three wood that moved from right to left, landed on the green, rolled toward the cup on the lower tier of the green and disappeared. As I and my fellow golfers began to shout and jump around, the ball came back into sight and stopped three feet past the pin. It had disappeared from view because of the undulation in the green. Disappointed but undaunted, I sank the putt for a birdie and put the idea of a free seven night Caribbean cruise out of my mind. Actually, when I came to my senses I was a bit relieved as I realized a hole-in-one would have meant free drinks for nearly 100 thirsty golf writers.

The Scottsdale area, with all its sunshine and terrific golf courses, is a true paradise for golfers and sun lovers. As Mikey used to say in the TV commercials..."Try It, You'll Like It".